Jeweller Jacqueline Cullen uses Whitby Jet, a rare gemstone made from fossilised wood to make dramatic fine jewellery. In this article Jacqueline, one of four craftspeople to receive a Career Catalyst Grant from the Goldsmiths’ Centre in 2020, explores how her fascination with this ancient material started and tells us how she is pushing the boundaries of her craft.

I have specialised in making Whitby jet jewellery for over 18 years and started to explore the material for my final collection at Central Saint Martins, leaving in 2003 with a First-Class Honours degree. Jet is a 180 million years old naturally black fossilised wood and in the UK is unique to the area around Whitby. It is derived from the ancestor to the monkey puzzle tree, araucaria, and is the whole tree trunk that has been squashed and carbonised over the millennia. 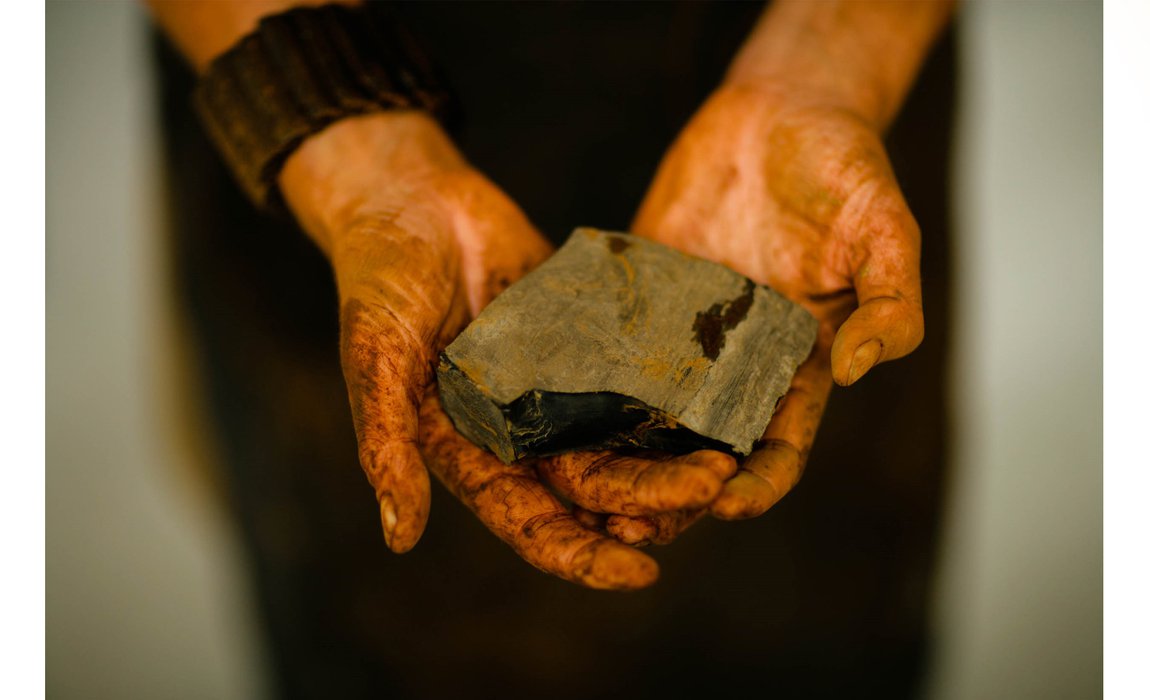 Used for adornment since Roman times, jet was made popular by Queen Victoria after the death of Prince Albert and the material became synonymous with mourning jewellery. Lightweight and naturally black, the material easily lent itself to large-scale carved and ornate cameos, beads and crosses which were able to stand out against the heavily decorated fashions of the time whilst still adhering to the strict funereal social rules. The Whitby jet mourning jewellery industry lasted for c. 80 years before the material slipped into obscurity in the early 20th century when craftspeople of the time didn’t move forward with changing fashions such as Art Nouveau and Art Deco.

Mined during its heyday Whitby jet is now rare and my supplier abseils on a rope over and down the cliffs accessing the ancient caves and Victorian crawl holes in order to collect the raw material which I then buy by the kilo. There are a small number of people in Whitby who continue to work with jet in quite a traditional way, but I am known for having pushed the material into completely new directions and for elevating its value and cache and revitalising its visibility. Through the years I have combined jet with innovative processes and formats that celebrate rather than disguise its inherent flaws and inclusions allowing the natural beauty of the material to speak for itself, removed from connotations of death, grief and morbidity. It has been my mission to reinvent this ancient, heritage material for a 21st century audience. 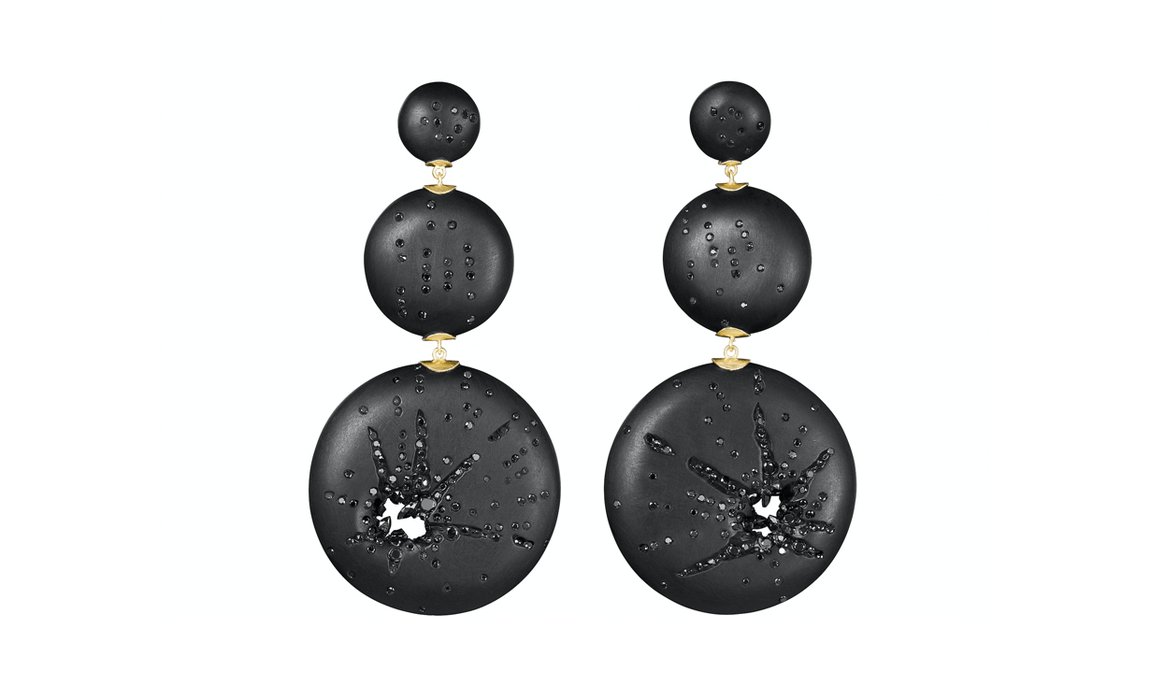 I am often asked how I came to work with jet and all I can say is that it was a flash of inspiration. I had collected a number of material samples to decide what to focus on for my final degree collection and amongst these was a tiny sample of jet. Suddenly I knew that this was the material for me even though at the time I was not very aware of its history or the technical processes needed to work with it. From the beginning, I have had to discover how to use jet through experimentation and trial and error reaching a level of self-taught skill that has meant my designs have not only been seen in some of the worlds’ best stores such as Bergdorf Goodman New York, Net-a-Porter and Dover Street Market and luxury press such as Vogue, Vanity Fair and Elle but I have also pushed its aesthetic and technical applications in ground-breaking directions going far beyond its known form of Victorian heavy, sentimental carving.

At the beginning of my jet journey at Central Saint Martins I experimented with Japanese Kintsugi techniques in response to breaking all my initial work through lack of technical knowledge. As I picked up the broken pieces from yet another attempt to turn jet on a lathe a Japanese fellow jewellery student regaled me of certain tea ceremony items that are bonded back together with their repaired cracks and breaks elevating the mended pieces to a higher value and preciousness. Jet breaks in clean conchoidal fractures and so I took the broken pieces, lined the edges with heavy 24Ct gold foil and pegged and bonded them back together. Once polished it left fine gold lines tracing where the pieces had been broken highlighting and elevating rather than disguising the repairs. 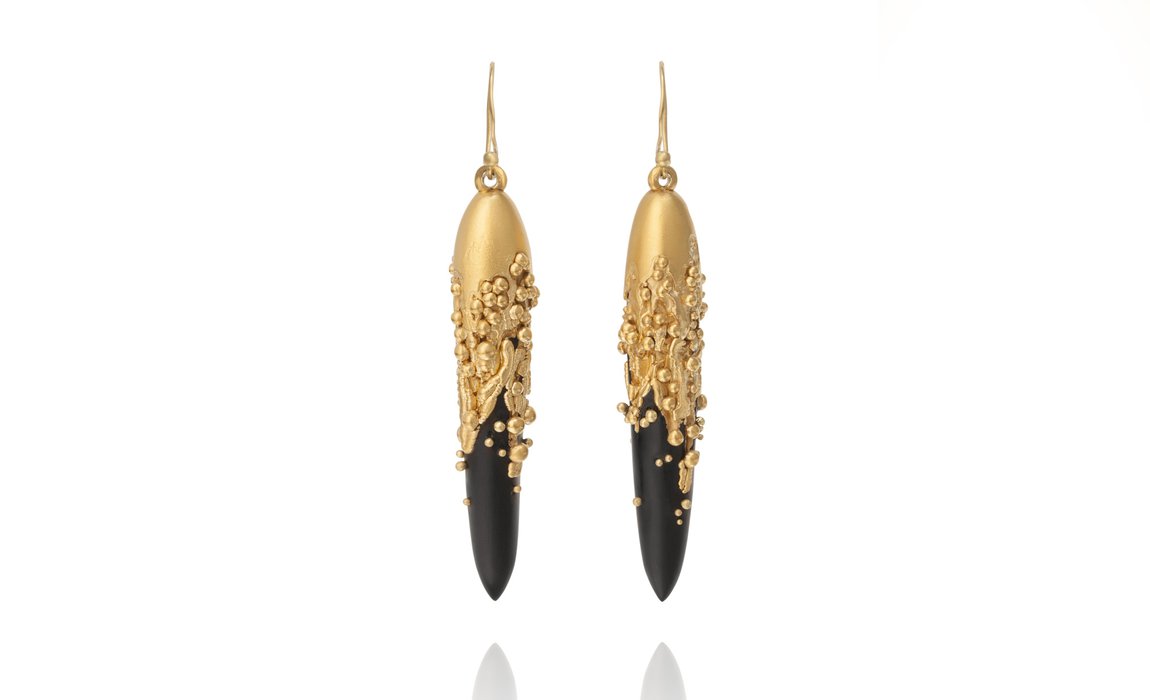 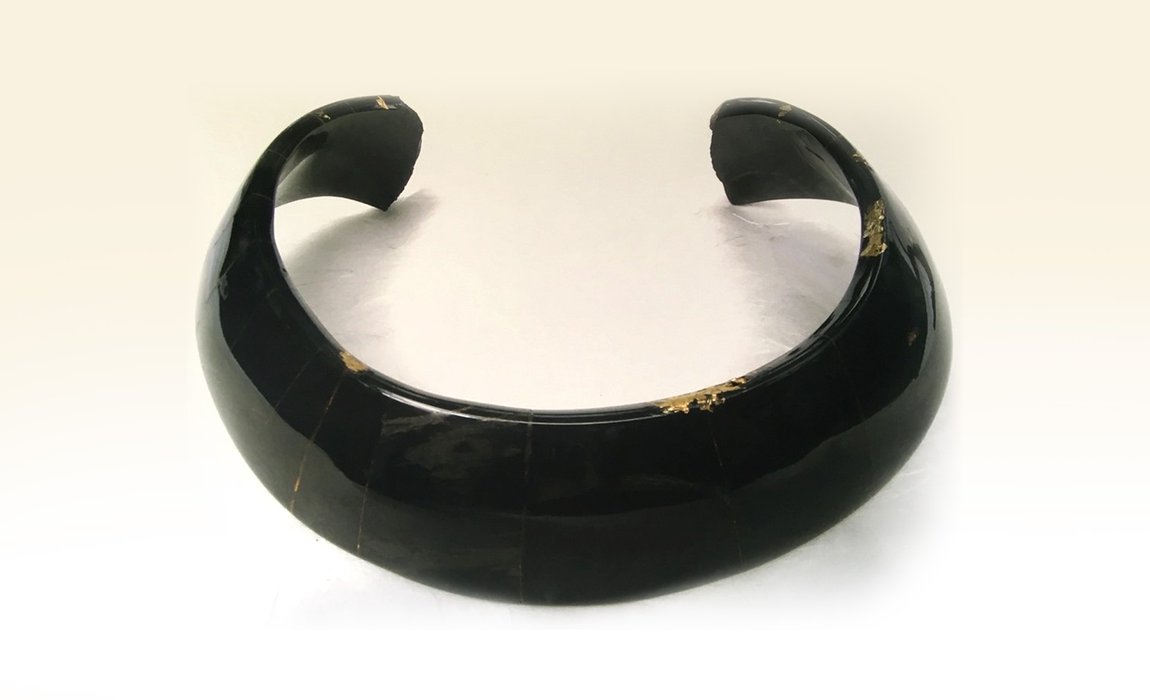 Working with jet is a kind of intuitive mindfulness. I have had to learn to not impose designs upon the material but to guide it into being what it fundamentally wants to be. Jet has lost all its organic structure so does not have a grain. It is soft and quick to work registering c. 3 on the Mohs scale of mineral hardness and cutting and shaping is a quick process compared to hardstone. Whitby jet is worked using lapidary (stone cutting) techniques. Initial cutting and forming is performed using water cooled saws and grinders with jet samples shaped intuitively against rotating wheels in a very sculptural process. My signature fissures and crevices are hand carved using various burrs in a jewellers’ pendant drill and final pieces are cleaned up using polishing compounds and matted down with pumice powder. Black diamonds are embedded directly into the jet and are the only gemstone which can do this without losing its fire and brilliance. Any other gemstone needs to have a metal backing to retain its’ light. 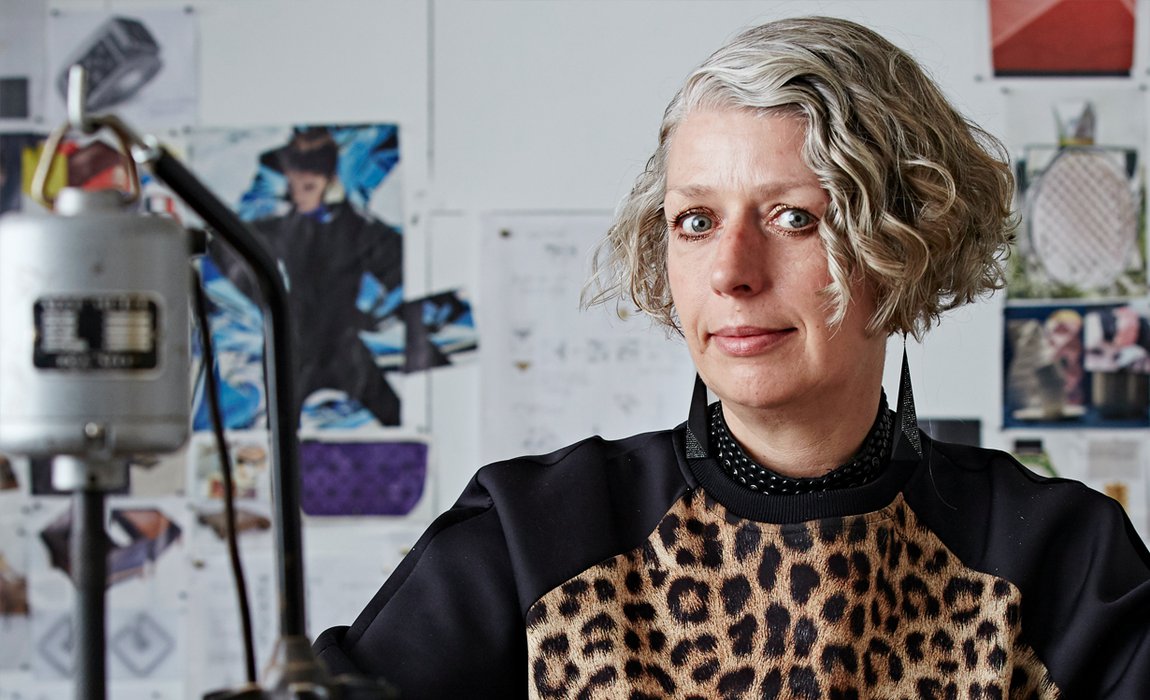 Over the preceding years I have pushed the boundaries both technically and aesthetically to completely reinvent how Whitby jet should be seen and perceived. I have used digital scanning, 3D printing then casting to replicate in gold the hand carved textures I’d made in jet; I have studded jet units with diamond set granulation on pins and I’ve carved it then had it electro formed to create the effect of running rivulets of lava flooding fissures and crevices created in the surface. I have CNC milled jet creating precision grooves which were then inlaid with precious metal chevrons set with pave diamonds and for the recent Dark Matter range the feeling of an exploding black hole in space has been recreated with jagged marquise diamonds set into a swirling hand-carved vortex.

I am constantly inspired by primordial forces of nature and elemental energy such as slashes of lightening, erupting volcanoes and black holes illuminated by colliding asteroids. I am revisiting volcanic eruptions and electro forming for my next jet collection and although I am focussing on hardstone for my Catalyst Grant activity I believe that these disparate materials will start to merge and flow together as I begin to explore the aesthetic possibilities of combining jet with chalcedony, agates, lapis, malachite and rock crystal.