Helen Drutt is renowned worldwide for her significant contributions to the advancement of Modern and Contemporary Craft. She is a deeply committed author, gallerist, educator, consultant, and collector has helped shape our knowledge of the field in innumerable ways. Join us as she shares her experiences of the development of the international jewellery movement, and gives an illustrated talk about her relationship to brooches, contemporary jewellery and collecting.

This event is part of the online programme developed to coincide with the exhibition The Brooch Unpinned: The Goldsmiths’ Company Collection 1961–2021. The Brooch Unpinned celebrates the art of the brooch and the dynamic relationships it creates – between maker and wearer and between wearer and viewer. It explores a selection of British brooches from the Goldsmiths’ Company’s unique jewellery collection, tracing the evolution of contemporary design in this most wearable and revealing of accessories. 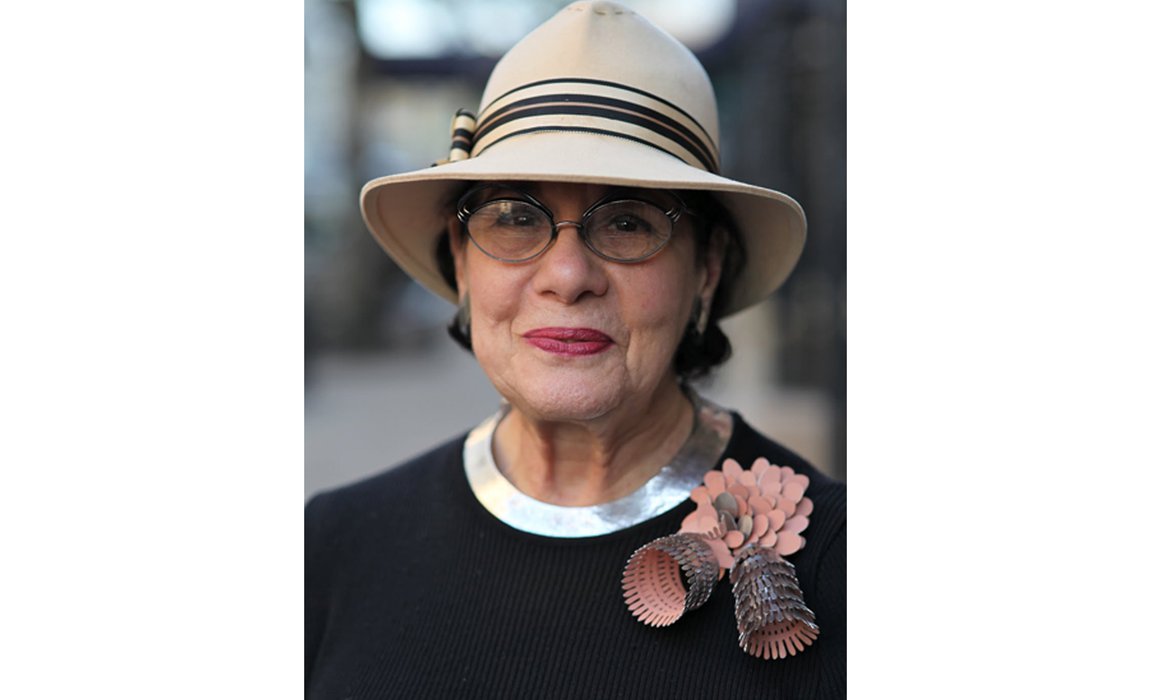 Helen W. Drutt English was one of the founding members of the Philadelphia Council of Professional Craftsmen in 1967 and served as its Executive Director until 1974. In 1973, she founded Helen Drutt Gallery in Philadelphia, and that same year developed the syllabus for the first college-level course in the history of modern craft. Helen Drutt Gallery was among the first in the United States to make a commitment to the Modern and Contemporary Craft Movement, and in 1979, American Craft magazine stated that the gallery was to crafts what Alfred Stieglitz’s Gallery 291 was to photography earlier in the twentieth century. Drutt played a critical role in bringing American Crafts to international recognition, and in introducing European, Australian, and Asian works to America. She has served as America’s ambassador for crafts, championing the work of American artists internationally, and placing their work in major museum collections worldwide.

Drutt’s visionary work, both in the identification and selection of artists that she exhibited and in her understanding of the importance of their work, led her to exhibit major artists working in metal and clay. At the same time, she built an extensive archive and library, which has become an invaluable resource to artists, scholars, curators, and institutions around the world. This vast repository of books, catalogues, images, and ephemera documents the history of the modern and contemporary crafts movement, capturing an important part of American cultural history. Drutt also has written and published extensively, contributing greatly to the field through her own personal scholarship.

Honors include the Fleisher Founder's Award, Philadelphia Museum of Art (1994); the Mayor’s Arts and Culture Award, Philadelphia (1994); Honorary Fellow, American Craft Council (1992); Lifetime Achievement in the Crafts, National Museum of Women, Washington, D.C. (1993); and Tyler Alumni Fellow, Honorary Doctorate of Arts, Moore College of Art and Design, Philadelphia (1990). She was awarded an Honorary Doctorate of Arts by the University of the Arts in May 2001 and by Alfred University in September 2019. She was named Visionary! by Museum of Arts and Design, New York, in 1999. In 2002, she was the recipient of the Philadelphia Art Alliance’s Award of Merit, and she was named A Distinguished Daughter of Pennsylvania by the Commonwealth of Pennsylvania. In 2004, she was admitted to the National Metalsmiths Hall of Fame by the Florida Society of Goldsmiths, and in 2006, she received the Philadelphia Craft Medal from the Philadelphia

Drutt serves on the American Board, National Gallery of Australia, Canberra; the Peter Dormer Lecture Advisory Committee, London, England; and the American board of Ilias Lalaounis Jewelry Museum in Athens, Greece. She was a trustee of the Archives of American Art, Smithsonian Institution, from 2010-2021; served on the Advisory Committee, Indian and Himalayan Art, Philadelphia Museum of Art (1996–2019) and was a curatorial consultant for The Hermitage Museum Foundation: USA (2013–15).

Drutt established the Maurice English Poetry Award (MEPA), which has supported a yearly award for a distinguished book of poetry (1985–2005) and annual poetry readings (2006–present). In 2012 she established the H. Peter Stern Lecture under the auspices of the World Monuments Fund, given semi-annually. In 2020, Drutt announced that she is donating her expansive collection of art books to Temple University. Drutt is currently researching a book that documents activities central to the craft field from 1960 to the present.

"A Certain Impression": The Story of Hallmarking

Enamelling and Flower Making with Metal for Young People