Through the medium of jewellery, London-based artist and maker Zoe Arnold seeks to transform everyday objects into treasure.

Although she is frequently described as a found object jeweller, she is often reluctant to assign labels to her work. She explains why in this interview with the Goldsmiths’ Centre, and shares the ethos behind her striking work.

An interview with Zoe Arnold

What is your process for discovering new objects, and how do you decide when an object is or isn't worthy of inclusion?

Often people will ask me, “what stone did you use in that piece?” And I’ve completely forgotten! I’m terrible at remembering the names of stones, because knowing the material value of something simply is not important to me. If in the moment I like something, I’m going to use it, and there’s all there is to it. Most people who buy my work aren’t interested in material value either and have a similar aesthetic to me, so it’s not often a clash.

Do you favour a particular kind of object?

Over the years this has shifted slowly, but I tend to like things that are quite battered. I’ve got a lot of lead animals at the moment that I want to do something with, old lead toys, and I only like them if they’re completely squashed, or if the paint has chipped off, or if they have legs missing, I don’t like them if they’re in perfect condition.

I like rusty metal and old flaky photographs. I don’t know why, but I don’t tend to use particularly bright, fresh colours in my work necessarily, except to give a pop of colour, or to provide some sort of contrast. The found objects I use have to look like treasures to me, like something with a bit of age to it, that’s had a bit of a life. 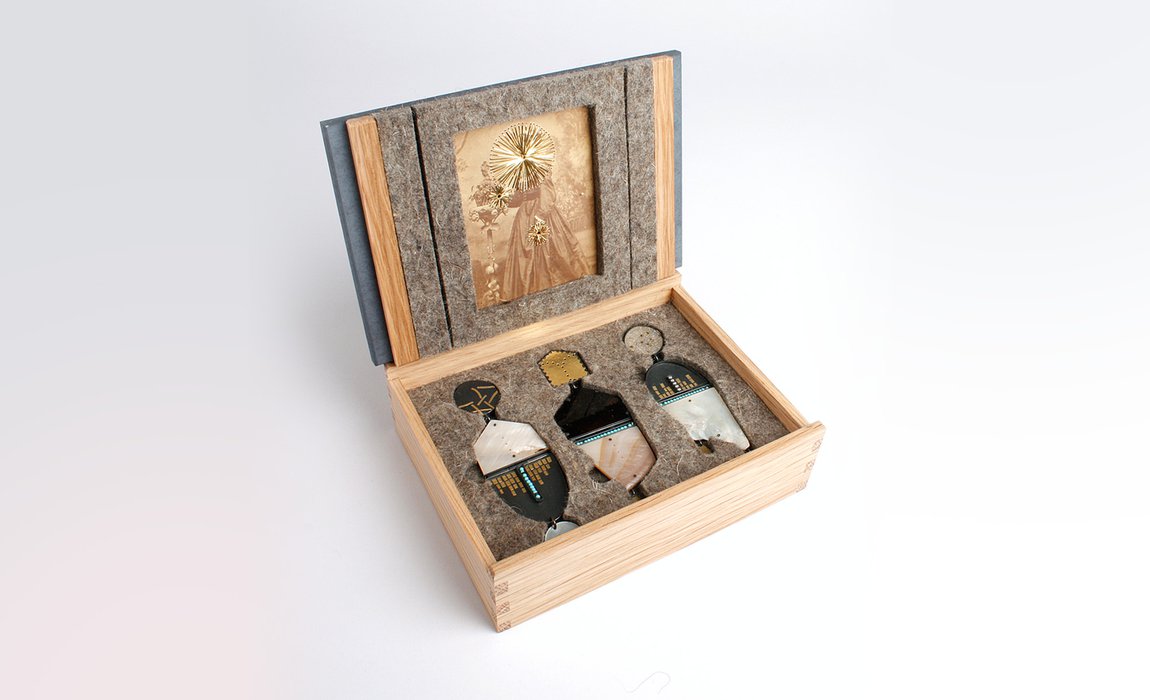 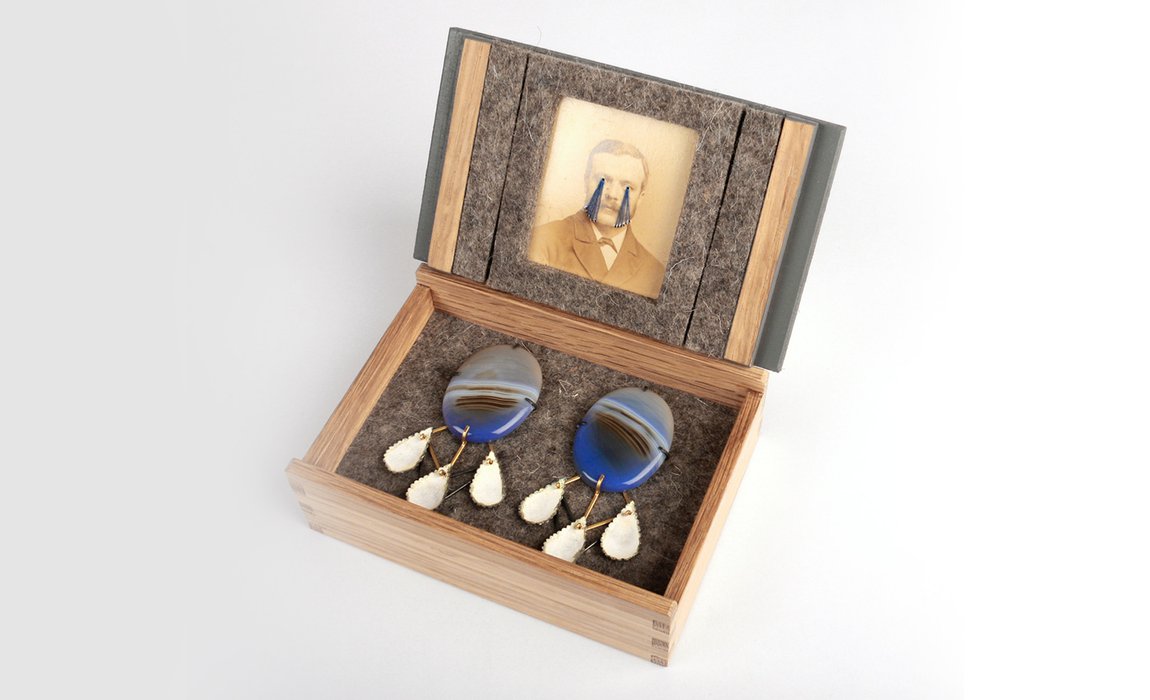 To what extent is the history behind an object, or the story it conveys, important to your work? How is this balanced against aesthetics?

I like maybe the illusion of history, as I don’t really delve into the actual history of objects to find out more about their origins. I prefer to leave a viewer guessing about what or where they might have been. I think my work ends up looking like it has some kind of history behind it, and a lot of my pieces do have a story behind them in some sense, but they’re quite loose. I think it doesn’t necessarily matter, because knowing the history behind an object would make it harder to marry it to what I’m trying to say through the piece. When that’s left open, it can say anything really. The images I use in my pieces for example, I just love them, but I want them to be kind of anonymous. I think if you knew who they were, it would add some kind of baggage to the piece.

I have one brooch that has a photograph in the middle, with antique gambling chips all around the edge, but I don’t know who that man is. Some of these photographs were given to me, some I got from a market in Paris, some from an antique fair. I like the fact that you don’t know who they are, and I like that with old photographs, you didn’t have a negative. You shot the picture and developed it directly onto a surface, so there is no other copy of that photograph anywhere, it’s the only one, and I think that makes it precious.

Would you describe yourself as a narrative jeweller?

I think other people would call me a narrative jeweller, but I wouldn't call myself one, because what does narrative mean, really? To me a narrative means an actual story, rather than just a thought or an emotion or a moment in time. I think the term narrative is too heavy. For example, the brooch I mentioned previously, it’s called Collection, and it has themes of curation and muses and the love of curating things together and family trees, but it’s as loose as that. Those are the thoughts that inspired the piece, but I wouldn’t describe that as a specific narrative. If the wearer really wants a narrative, they can invent one, and there are people who love doing that. I use a lot of animals in my work and there are customers who will give them their own names, and I think that’s nice, because jewellery is very personal.

Once something belongs to someone and they wear it, it becomes a very personal thing, which is very different from say, sculpture. Sculpture isn’t necessarily personal, it can be in your home, but it doesn’t have that same connection. It really just comes down to a love of treasures. I’m trying to create things that I think I want to find.

Often as makers we’re expected to stick to one style or to doing one particular thing, and I suppose I do have a style, but I’ll often make very different kinds of work. I don’t like the idea of even being called a jeweller, as I think being a maker you often get stuck doing one thing. Why can’t someone who’s an interior designer or print artist get a chance to design some cutlery? If you’re creative you’re creative, and you should get the chance to have that input in anything. 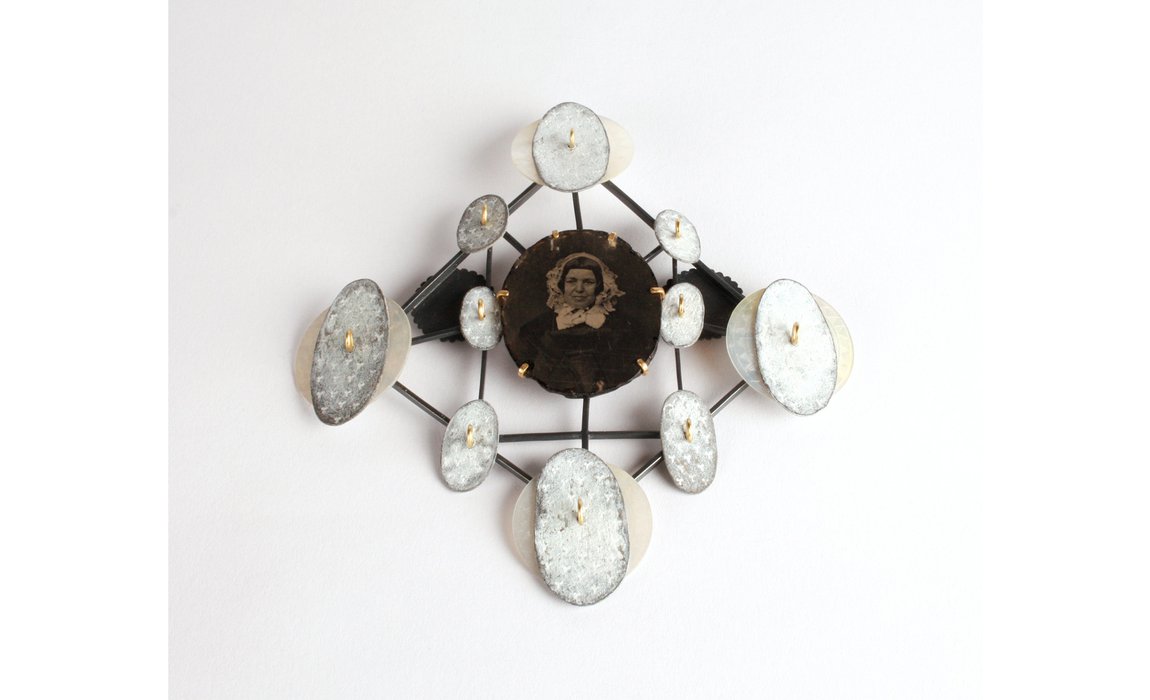 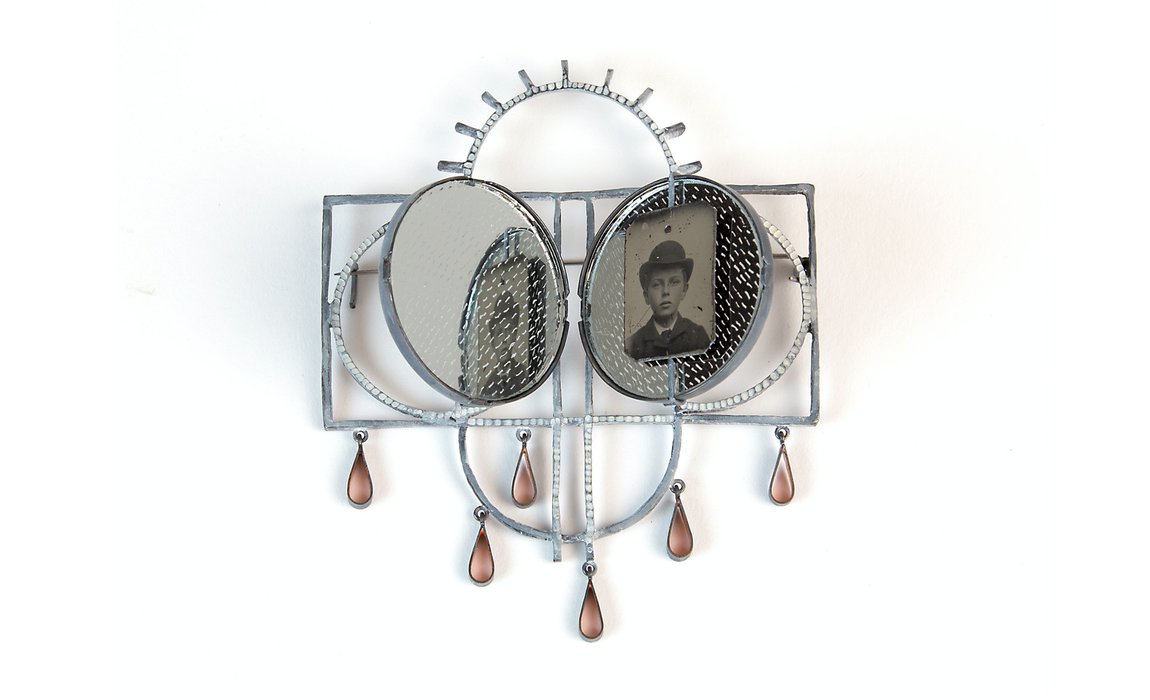 To what extent do you adapt or alter the objects for your work?

It depends what the object is. So the brooch I mentioned earlier has mother of pearl gambling chips around its edge, which I had to drill to rivet things on top of, and I had to also drill the photograph to attach it to the backing. I might adjust things slightly, but I don’t necessarily transform something into something else, you can still see what it is. I think I treat object as stones, so I normally set something as if it were a stone. Even if it’s just a piece of glass or something rusty, it will normally get the same treatment as if I were setting a diamond. That goes back to not distinguishing something by its material value, because to me these objects are just as beautiful.

What are the biggest challenges in working with found objects?

One of the things I love about working with objects is that I do get bored quite quickly, so I’ll make a piece intended to create a whole collection but then by the time I’ve finished it, I’ve thought of something else that I want to do instead. Working with lots of different materials I find really interesting, and finding ways of setting them and attaching them to each other, which takes so much time. When a piece is finished, you often think, how did it take so long to make that, it doesn’t look complicated - but it’s figuring out how to attach things without damaging or breaking them, because they often don’t glue well and need to be attached in manual ways. I find it really interesting figuring out how to work with each new material.

From a sustainability standpoint, what are the benefits of recycling objects for use in jewellery-making?

Obviously, it's something that we're all thinking about at the moment. I’m someone who is attracted to these objects anyway, I don’t think anyone would set out to work with these rusty things just because it’s sustainable, you’d have to love them first!

I’m trying to work more with recycled, organic, fair-mined and fair-trade gold, because I think that’s something we all need to start doing more of if possible. We’re so disconnected from that side of things, we buy some silver without knowing how it’s gotten to us at all, and it’s something that will be looked at more and more in future as we try to do better for the environment.

Watch the interview
Back to Resources